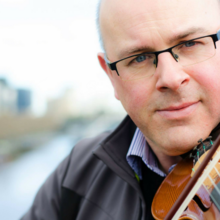 Celtic music and playing Celtic fiddle have really opened my eyes to new possibilities and the adventures of playing a musical instrument.

After over thirty years of teaching, playing, entertaining and performing, with your permission and through the Celtic Fiddle Guru Academy,  I would now like to help you on your own magical musical journey.

So here is a bit more about my own journey as told by one of my friends as an introduction to a recent performance...

What’s music got to do with it?

Colin MacLeod, “The Celtic Fiddle Guru”, is opening new windows to the potential of music in people’s lives.

Colin is originally from Scotland and now travels the world engaging audiences through playing Celtic fiddle, telling stories, teaching and performing. Colin loves to  from the heart as he shares his rich knowledge about the Celtic culture.

Colin was a young lad when he started playing the violin in Scotland at the age of 7— thus beginning his musical journey that has so far covered five continents, including Europe, Asia, Africa, Australia and North America.

Always willing to experience life first-hand, Colin’s personal philosophy is ”you never know— unless you go.” And, GO he has. Leaving his homeland in Scotland to establishing a second home base in Melbourne, Australia he has sought out Scottish culture wherever his travels take him. While living abroad at the time, Colin and friends co-founded the Scottish Music Festival in Resipole, Scotland.

In 2017, Colin’s Celtic Fiddle Playing was taken to “new inspirational heights” by playing the violin in a plane at 33,000 feet over the peak of Mt. Everest in Asia.

On the ground again, he was to be found serenading the elephants in the Sumatran jungle with a rendition of “Jungle Bells.”

Colin’s present focus is growing his international music business in the USA, where he inspires, educates and entertains for schools, colleges, businesses and social events.

Ask Colin what it was like to play at sunrise in Sedona, Arizona; at the Grand Canyon or the Hoover Dam;

And find out what the resident seals at Pier 39 in San Francisco Bay think of his Celtic fiddle playing!

…and look up often… you never know when he might be skydiving into a neighborhood near you.

Find out more on Colin’s travels and adventures below

I hope you enjoy your time during your stay with the Celtic Fiddle Guru Academy to turn your own moments into memories.

I look forward to catching up with you online or in person at one of our events or classes.